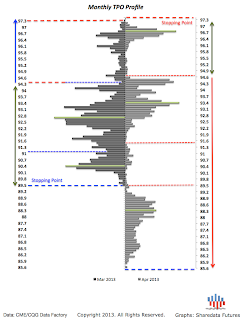 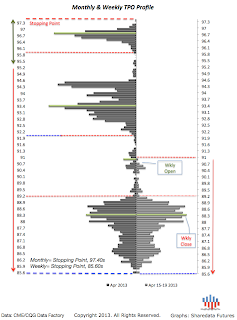 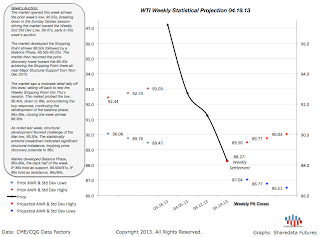 The market began the week with continued balance, 88s-89.50s, within the context of the larger Balance Area, 86s-89.50s, following the Stopping Point at/near 86s (Major Structural Support). The multi-day failure of the sellside to drive the market below 88s was a key clue to the pending inventory imbalance developing.

Following the coil at the Balance Area High early in the week, the market encountered the buyside directional phase midweek. As the monthly graphic above illustrates, the near term low usage area resided above the 89.50s, implying the buyside auction was likely to continue toward the Overhead Supply Cluster, 92s-94.50s, as the market filled in that low usage. This Structural fact  superseded Statistical Projections for the week, and the market did rally toward the Overhead Cluster’s POC at/near 93.50s, before achieving the Weekly Stopping Point at 94s, closing the week at/near 93s.

These studies informed our subscribers of the the Structural Development of a Stopping Point at a Major Structural Support, 86s, and the implications of a breakout at either edge of the Subsequent Balance Area, 86-89.50s that developed. This information provided quantifiable, potential destinations and strategy (range positions early week, long positions mid to late week) in congruence with the market structure.

A holistic view based on the market generated data and probability logic.
For additional information & a 1 week free trial,
please visit our subscription page.