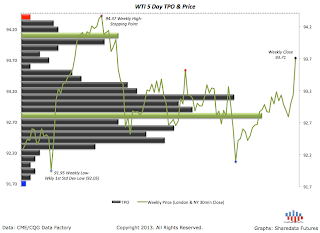 As noted in last week’s review here, both 93.80s and 92s were key in this week’s auction. The pullback to 92s set the stage for range extension higher above the key structural resistance during this week’s contract roll and larger balance context.

The market auctioned lower from last week’s close toward the Wkly 1st Std Dev Low at/near 92s where there was a buyside rejection. The market rallied, adjusting the short inventory, toward the key structural high, 93.80s, breaking out higher before achieving the Weekly Stopping Point at/near 94.40s.

There was a sellside rejection there as the market sold back toward the 92.80s, balancing during the mid-week FOMC/EIA narratives. The sellside then initiated, driving the market lower to retest the weekly low. The retest was met with a buy response as the market rallied back up the weekly range, closing in the upper quartile for the week at/near 93.75s.