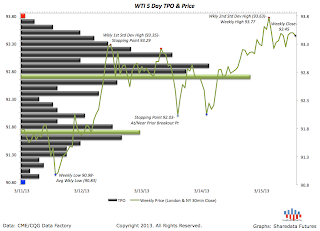 As noted in last week’s review here, this week’s response at the key structural resistance, 91.50s/92s, was key. The sellside failure there set the stage for this week’s auction.

The market auctioned down to the Avg Wkly Range Low area, encountered a buy response, auctioning to the key structural resistance, 91.50s/92s, where the sellside failed to defend. The buyside auction continued to the Wkly 1st Std Dev High, developing a Stopping Point and balance through mid-week.

Following balance and a restest of the structural breakout point, 92s, the market began a new buyside auction higher toward the Wkly 2nd Std Dev High, closing the week at/near the high.